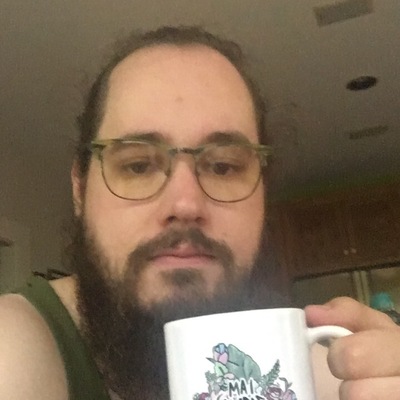 Shambling ruin of a teenage rocketship trying to piece his writing brain back together.

One time in college, I asked Stephen Graham Jones, a Blackfeet indigenous author, what his preferred snacks for writing time were. He replied that he had formerly eaten a lot of junk food but was mostly just drinking tea nowadays.

He seemed pretty delighted to answer, lol. I treasure that memory and the signed book I got.

I struggled through my laptop waking up slowly, installing Libreoffice slowly, and just working slowly in general, but I wrote five pages!

Hello shop. I bring you this photograph of toy robots because I have started writing a story about them.

I skipped drafting a chapter or whatever of this story this week because I am sad. I basically got dumped yesterday so I’m just not gonna. And that’s ok.

If fedi ever gets to read this book, I know exactly which characters y’all are gonna lose it over.

Ok too sleepy. Finish drafting this chapter next week.

Whew, drafting that chapter was a chore. But it’s done.

I only drafted half a chapter this week, but in my defense...nobody is paying me, I’m not on a deadline, the coffee shop was kinda loud (and my usual place was once again occupied), and the brain I have don’t always work so good.

Oh they left, thank goodness. Feels so unnatural do write on a couch.

There are people sitting next to the spot i normally sit at here at the coffee shop, and this should be illegal.

This moose plushy and this hot chocolate with the works are my drafting companions today.

Neopronouns are fun and interesting to write with, if challenging.

Any writer who has ever used human genders and gender roles for true aliens is a coward.

I am Writing. A little.

Hello shop. I have added you to my Toot! app.

Well this is just dang fascinating.

I know I want Eli to find a romantic partner, but she is otherwise the least fleshed-our in terms of backstory and planned arc.

So I’m looking for suggestions!

Eli is one of four members of a traveling crew in a post-post-apocalyptic world. Her crewmates are Anthe, Iron, and Stenlo. They go from place to place using their powers to help people out.

Anthe is a healer. Her arc is understanding the Corruption—which I won’t explain here. ;)

Iron has fire powers. His arc is going to deal with his traumatic past.

Stenlo has plant powers. His arc touches on confronting the reality of his powers and understanding how they can be used for good.

So, here’s what I’ve got on my plate right now: I would like a little bit of help filling in a character arc for one of the protagonists in the story I’m focusing on rn.

Eli (“Ellie”) is a tall, east-Asian-looking lesbian with metal powers, and she’s the only one of the four protagonists that I don’t have a quasi-definite backstory and a planned arc over the course of the story.

I will provide some context in the following toots.

Shambling ruin of a teenage rocketship trying to piece his writing brain back together.